The Gupta period lasted in India from 320 – 545 CE, during the 4th to 6th centuries. It was a  revival of the long and elaborate reign of ancient Hinduism from 2000 BCE where Hinduism first emerged, but it wasn’t until the golden age of Indian art, the Gupta Dynasty, that it  would embody its zenith. Sculpture was conceived and used vehemently for worship of the  Hindu pantheon during the Gupta Dynasty. Devotional imagery played a pivotal and intrinsic role to worship within Hinduism and gift giving (dana), regular pilgrimage and the religious  act of “seeing” the deity (darsan) relied heavily and solely on the sculpture of the Gupta  Dynasty.

Hinduism is a henotheistic religion not of words but of movements, looks, actions and  journeys (Frazier 2012). The Classical period known as the Gupta Dynasty saw the invention  of images to be used in worship and the emergence of the divine image (Eck 1998). This occurred at the same time that sumptuous Gupta cave shrines and temples were conceived  (Eck 1998). It was an era of artistic accomplishment and triumph. The sole and guiding  purpose of temples was to house the deity (Elgood 2000) as it embodied the energies of the  gods within it (Frazier 2012). Sculpture in the Gupta period was both iconic and aniconic.  Sculpture embodied and was an incarnation and manifestation of the god or goddess being  depicted; it was the deity taking form (Eck 1998). The chief motivation for Hindu’s to  interact with sculptures was the compulsory, religious participation in benevolent acts to create karmic merit (Billington 1997). This was done in order to achieve ultimate liberation  (moksha) and escape the incessant cycle of reincarnation. It is for this reason alone that the  main precepts of Hinduism of gift giving, pilgrimage and darsan were engaged, and they all  required the presence of a deity in physical form, the sculpture.

Sculpture aided Hindu worship in the Gupta period through gift giving (dana) in a devotional ritual now known as puja. Dana originated in the Vedic period in 1500 – 500 BCE and was a responsibility and requirement of every person (Shah and Ramamoorthy 2013). Gifts to the deity within a temple, usually placed at the base of the sculpture, as we see in honour of the  god Shiva in Figure 1 below, can include food, fresh flowers, leaves, incense, nuts and cloth  (Eck 1998). In Figure 2 below we see remnants of puja, the communion between the devotee  and the deity through anointing of the sculpture with offerings such as ghee, milk, honey,  yoghurt, sesame oil or rose water (Frazier 2012). Sixteen honour offerings is considered the  proper number for a complete puja (Eck 1998). 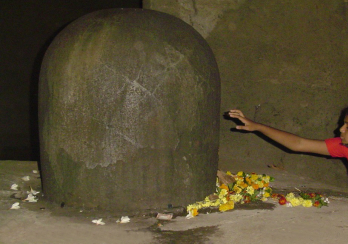 Figure 2. Pools of Puja Being Placed On Shiva Linga At Elephanta Caves By Boy. 2008,  ointments, flowers and other gifts on solid stone. Elephanta Caves, India. Reproduced from  Elephanta Co website. 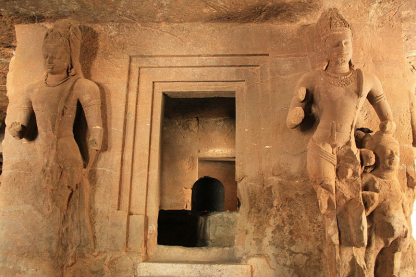 Temples themselves were often royal gifts made by kings (Elgood 2000; Hayes 1987) and  royalty would often donate their spoils of war to the temple (Rao 2016). It is clear to see that gift giving upon a sculpture of the Gupta Dynasty, from all classes of people, was a vital, altruistic act, however duty-bound, and visiting sacred sculptures was the fundamental ingredient in its completion.

Hindu worship was made possible through pilgrimage to sacred sculptures in the Gupta  Dynasty. Pilgrimages started in India as early as the first century CE and continued through  the Gupta period (Eck 1998). Pilgrims were offered salvation, purification and healing  (Vukonić 1992) if they made regular pilgrimages to temples and cave shrines (Elgood 2000). 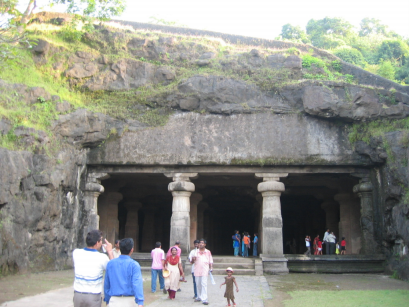 Temples were designed very precisely to encourage communication between man and god  (Elgood 2000). As Elgood (2000, 93) writes, “It is this interplay between the potential  divinity within man and the divinity within the architectural form which creates the purpose  and the dialogue between the two.” From beginning to end, the temple build and its  sculptures was a ritual activity (Eck 1998). The silpasastra text explains in detail the artistic  requirements for each carved sculpture (Eck 1998). A sculpture that was pleasing to the eye (as seen in Figure 5) that strictly followed these guidelines invited the deity to reside in it, and  when this occurred a fortunate blessing was placed upon the worshipper (Banerjea as quoted by Eck 1998). From sacred beginnings arose Gupta sculpture, and pilgrims would visit temples and cave shrines because sculptures were imbued with holy divinity. 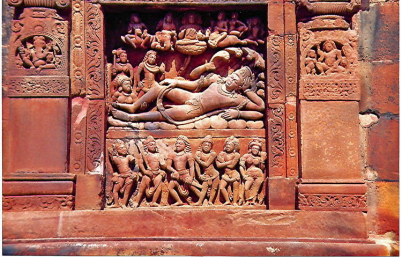 As a pilgrim, temple engagement was active and required participation (Eck 1998). Upon arrival, pilgrims would circumambulate the temple, often greeted by Ganesha (Figure 6  below). Ganesha is the remover of obstacles who blesses all beginnings (Eck 1998). Next,  one journeys to the womb chamber where another circumambulation occurs. Here the  worshipper receives the darsan of the deity (Eck 1998). When devotees travel on pilgrimage  to temples to see its sculpture, it is solely for the darsan of its deities (Eck 1998), which we  will discuss next. Devotees had to “see” the image to receive its blessing, which is why  pilgrimage was essential to Hindu’s, and shows just how critical access to places of worship  was to religious life in the Gupta period. 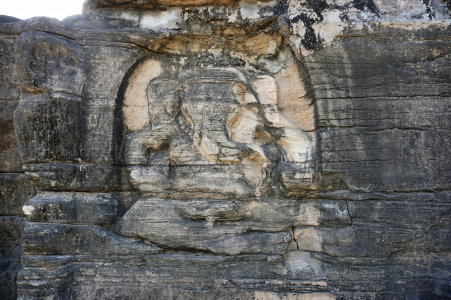 Sculpture was crafted to aid Hindu worship through darsan during the Gupta dynasty.  Darsan is the visual exchange from a deity to its devotee and is the most significant element  of Hindu worship (Eck 1998). Through direct eye contact with the statue of the deity,  devotees gain spiritual insights and holy emanations (Meredith and Hickman 2005; Elgood  2000). Hinduism sees the eyes as doorways to the soul (Elgood 2000), and much importance  was placed upon the eyes of Gupta sculptures as we see in the big, wide, open eyes of Vishnu  in Figure 7 below. The sculpture is charged with religious meaning and eye contact was  precisely how devotees would interact with the deity and garner blessings from the divine. Sculptural artefacts were employed to communicate directly with the deity (Meredith and  Hickman 2005) and darsan, achieved strictly through gazing at the sculpture, meant that  sculpture was precisely the mode of delivery for this all important practice.

The venerating of holy sculptures was part of everyday life in the Gupta Dynasty, just as it is  today. Gift giving still occurs in India with consistent fervour and pilgrimage too, with over  100 million people visiting around 2,000 sacred sites every year (Shinde 2011), all to take in  the darsan of the deity. Sculpture’s relevance to the religion has only increased in number,  prominence and vitality, and it is the triumphant Gupta Dynasty that invented a timeless  legacy of sculpture, cave shrines and temples to aid reverence, devotion and ultimate liberation for Hindu’s the world over.

Shinde, Kiran A. 2011. “This Is Religious Environment: Sacred Space, Environmental  Discourses, and Environmental Behaviour at a Hindu Pilgrimage Site in  India.” Space and Culture 14 (4): 448–63. https://doi