Perhaps no other artist in history has unfurled along a spiritual path more so than Henri Matisse. A self-declared atheist who followed no religious doctrine (Caranfa 2014), he nevertheless gravitated towards the therapeutic in art and would incorporate his inner spiritual life to his outer artistic life. This essay will argue that while Matisse was not religious his growing spirituality was reflected in his art and reached a pinnacle just before his death. Our focus will be on his early days of artistic turmoil, his usage of colour as  emotion, his urge to simplify his art and his life, and finally the culmination of his spirituality in his masterpiece, the Chapel of the Rosary. 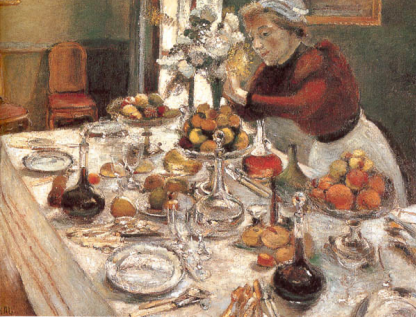 Matisse was introduced to Impressionism in 1895 by John Russell (Allen 1999) who taught  him colour theory, evident in his first Salon exhibited masterpiece The Dinner Table (figure  1). Matisse then deserted his earth-coloured palette for Post-Impressionist colour. Inspired by exhibitions from Van Gogh, Gauguin and Cezanne (Preble 1989), Matisse then lead the  Fauvism movement in 1904. Abandoning realistic colour depictions and embracing  abstraction, Fauvism was a celebration of vivid colour, intense hues, strong contrasts,  expressive brushstrokes, large areas of colour and basic shapes, as we see in Bonheur de  Vivre (Joy of Life) (figure 3). Additional influence from his father’s textile profession  (McKenzie 2005), exposure to Islamic art (Preble 1989) and his own carpets and fabrics that  Matisse called his “working library” (as quoted in The Personal Life of Henri Matisse 2020,  para 58) can be seen in The Dessert: Harmony in Red (The Red Room) (figure 2) in the  geometric, decorative, abstract patterning and rich colours.

Elements of Matisse’s spirituality can be compared to Kandinsky’s. Matisse said the ultimate  aim of his work was always to discover “the essential character of things” and to express  himself through art that contained “balance, purity and serenity” (as quoted in Dabrowski 2004, para 4). Mirroring Matisse, in 1910 Wassily Kandinsky, who was strongly tied to  Theosophy (Ringbom 1966), published his seminal book Concerning the Spiritual In Art and  similarly declared that the artists’ role is to find “the principle of the innermost necessity”  through expression of the “vibration of the human soul” (Kandinsky, as quoted in  Concerning the Spiritual In Art 2020, para 1), effectively putting prominence on expressing  ones internal, essential essence. This shows that both Kandinsky and Matisse shared similar  spiritual and artistic goals despite Kandinsky’s strong affiliation with a religious organisation and Matisse being non-religious.

Even amongst a tumultuous early artistic life, Matisse still contained seeds of spirituality.  Hilary Spurling’s biography, The Unknown Matisse (2005) describes in detail his early years  of turbulence that included self-doubt, despair, poverty, humiliation and rejection. His art  was not well received by critics who dismissed his work as devoid of formal and spiritual  substance lacking artistic achievement (Lewis 2009). Matisse’s son in law, Georges Duthuit,  spoke of Matisse’s need to alchemise and heal the disorder in his psyche through making  pictorial artworks (Munson 1999). Regenerative methods of self-revival were required, and Matisse would do this through his art. “The spiritual journey consists of simply ceasing to be  an enemy of ourselves” said Annette Noontil (1994, 12), and Matisse used his art and his  turmoil to become spiritually in tune with his inner state. Caranfa (2003, 105) stated that  “To create, explains Matisse, is to express what we have deep within ourselves, what we  feel in our encounter with the outside world”. Furthermore, Alain de Botton (2013, 17) declared that “Art holds out the promise of inner wholeness” and through his art Matisse  transformed his turmoil into simplicity, sincerity, humility, joy and love (Caranfa 2014) making his creations a spiritual act.

Matisse was devoted to translating emotion to canvas through usage of colour. He was not  concerned with imitations of reality, instead his art became an outlet for his feelings,  thereby making it a cathartic, spiritual act. Matisse’s enjoyment of lush colour became his  hallmark (Buser 1995) and his Fauve masterpiece Bonheur de Vivre (Joy of Life) was an  explosion of a brightly coloured meadow, sky, forest and nude figures at leisure. “The  primary catalyst of work is feelings, emotions: I let myself always be guided by my instinct”  and, “while working I never try to think, only to feel” (Matisse, as quoted in Caranfa 2014,  79), showing that Matisse was driven by his internal world when choosing his palette.  Matisse once said, “If painting belongs to the realm of the Spirit and colour to that of the  Senses, you must draw first to cultivate the Spirit and be able to lead colour through the  paths of the Spirit” (as quoted in Caranfa 2003, 110), showing that colour and art was a  spiritual journey for Matisse. Matisse regarded drawing and colour as acts to be revered  (Caranfa 2014) and the sacred was embedded in his artistic approach. “My line drawing is  the purest and most direct translation of my emotion,” Matisse wrote (as quoted in Caranfa  2014, 85). Matisse expressed the world of the spirit in his art through colour itself (Caranfa  2014) and communicating his emotions through colour was intrinsically linked to his  spirituality. 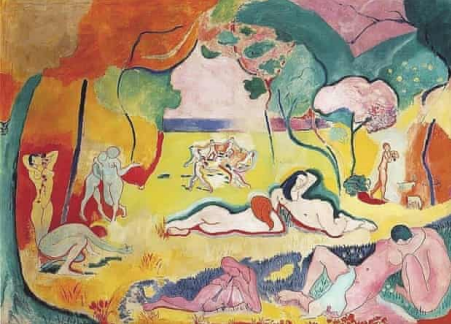 In later life Matisse’s urge to simplify his art and his life was a symbiotic relationship.  Gravitating towards practices of silence and solitude, he felt he had reached the source of  artistic creation by going inwards (Caranfa 2003). Through simplification Matisse wanted to  create a sense of wholeness in his art that rose above unrest and evoked religious awe,  serenity and joy (Carnafa 2014). In the 1950’s after a bout of illness, Matisse moved away  from painting at an easel in favour of large scale paper cut outs. In Bonheur de Vivre (Joy of  Life) (figure 3) we can see the beginnings of his paper cut outs, a mode of simplification that  would distil his later art. He mentioned that to simplify life we must not admit anything  useless (Caranfa 2014) and simplification for Matisse can best be seen in Destiny (Le Destin)  from Jazz (figure 4). The minimal lines, flat but vibrant colours and lack of shadows had now  reached its zenith with Matisse’s paper cut outs that were so cleverly simple they were pure  mastery. 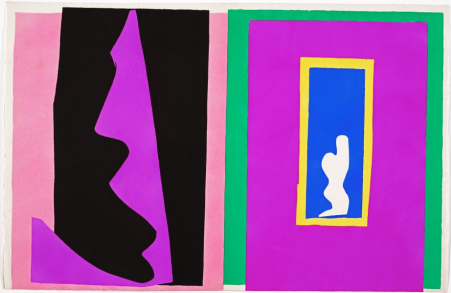 Matisse tells us he only believes in God when he works (Caranfa 2014), and the pinnacle of  his spirituality came to fruition in the Chapel of the Rosary (figure 5). Matisse said he  “wanted those entering the chapel to feel themselves purified and lightened of their  burdens” (as quoted in Brady 2017, para 7), and he did this through both light and colour.  The vivid green, cool yellow and iridescent blue of the stained-glass windows glow in the  sun and bathe all who enter in coloured light. The spiritual space that Matisse intended for  the chapel would allow “visitors to experience a lightening of the spirit so that, even without  being believers, they sense a milieu of spiritual elevation, where thought is clarified, where  feeling itself is lightened” (Matisse, as quoted in Caranfa 2003, 109). Creating spiritual awe  in such a mystical space shows that Matisse’s spiritual leanings had come full circle without  being tied to a religious doctrine other than the elevation of the spirit. 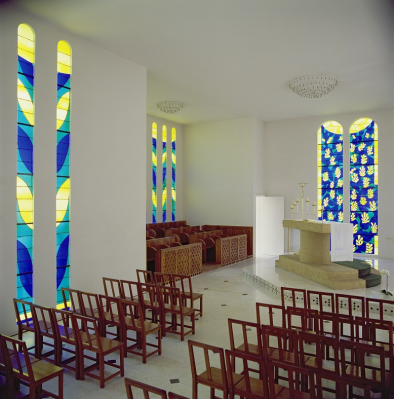 Over his lifetime Matisse as not religious but his growing spirituality was reflected in his art  and reached a pinnacle just before his death. Matisse’s resilience and determination to  express his inner world through art in as simple terms as possible enabled a rich legacy of art that triumphs over adversity. By reflecting inwards and using colour as emotional  alchemy he celebrated the joys of life with silence, solitude and sincerity in a body of artistic achievement that echoes with spiritual simplicity, divinity and love.

McKenzie, Janet. 2005. “Matisse, His Art and His Textiles. The Fabric of Dreams.” Studio  International. https://www.studiointernational.com/index.php/matisse–his art-and-his-textiles–the-fabric-of-dreams

Noontil, Annette. 1994. The Body is the Barometer of the Soul. Victoria: McPhersons Printing  Group.

Behavioural and Eye-Tracking Study.” PLoS One 7 (5).